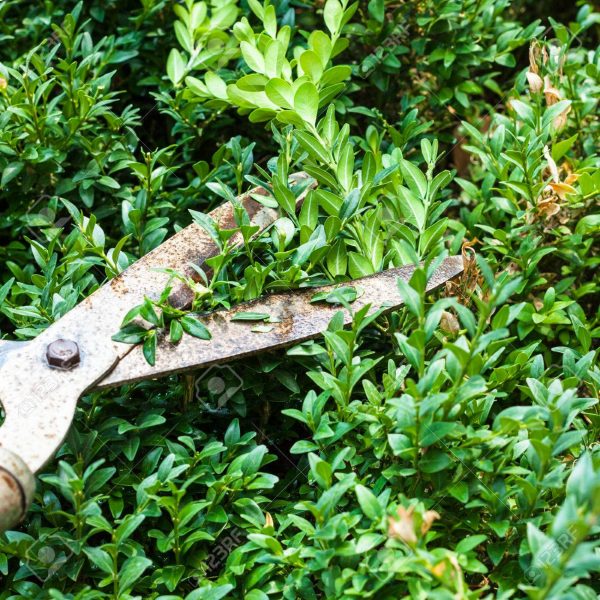 [Thanks to Horticulture Chair, Kevin Tepas, for this informative report!]  Boxwood is a popular hedge material because it is an evergreen with a dense growth habit. Hedges of boxwood (e.g. Boxus microphylla japonica ‘Green Beauty’) can provide walls around a lawn and divide the yard into different garden “rooms”.  When other plants die back in the winter, the boxwood hedges remain green.

When leaves cease to be useful

Healthy leaves of boxwood remain on the plant for two to three years. The leaves that were cut during trimming in the spring of last year often remain green and intact long after pruning. Regular trimming helps to maintain the shape of the hedge and it also promotes more branching.  However, as the new growths spread out, the older leaves get covered and deprived of sunlight.  Leaves that do not get enough sunlight become photosynthetically inactive and dependent, creating an increased deficit on food supply for the ever-increasing foliage.  Eventually, the dependent leaves get less and less food ration until the plant decides that they are no longer useful. Plants generally have a very accurate accounting process in this regard.  When a leaf if considered unproductive, the plant will separate it by blocking the passage way for food supply until the leaf is completely dead and detached.  Technically, this process is called abscission.

When less is more

To maintain a healthy boxwood shrub or hedge, the ratio of the active to inactive leaves need to be increased.  As a general rule, all leaves need to get exposed to sunlight. This can be achieved by thinning the branches to allow sunlight to reach into the depths of the canopy.  Thinning also improves air circulation within the hedge thus preventing the growth of diseases.